WHAT IS TMS THERAPY?

TMS therapy is a non-invasive treatment for depression that uses a high-intensity electromagnetic field that pulsates in order to stimulate and activate targeted areas of the brain that have been shown to be underactive in depression. The stimulation is produced by a treatment coil contained in a helmet or placed directly against the scalp. The magnetic field goes through the scalp and the bone easily and induces a weak electrical current. This current briefly activates the nerve cells of the brain causing the release of nerve growth factors and other transmitters in the area we target. This causes an increase in the strength and number of connections to surrounding areas and this correlates with improvements in depressive symptoms.

TMS or rTMS is available in both North Bay and Sudbury now. Book your Free Consultation with either Paige or Crystal to see if you are a good candidate for this treatment.

TMS therapy is approved by Health Canada for the treatment of depressive episodes in patients suffering from Major Depressive Disorder who failed to achieve satisfactory improvement with any number of antidepressants trials for the current episode of depression. The Canadian Network for Mood and Anxiety Treatments (CANMAT, 2016) considers TMS therapy to be a first-line treatment for individuals with treatment-resistant depression who have failed at least 1 antidepressant. Long term effects of exposure to the treatment are not known. However, exposure to other devices (such as MRI scanners) with the same type and strength of magnetic fields as produced by TMS therapy are not associated with significant short-term or long-term safety concerns.

What are the costs associated with tms therapy?

The total cost for TMS therapy treatment will be based on the number of sessions necessary to bring a response or a remission and will vary from patient to patient, depending on the severity of their illness.

The initial assessment is absolutely FREE and each sessions are $150.00.

HOW DOES TMS THERAPY WORK? 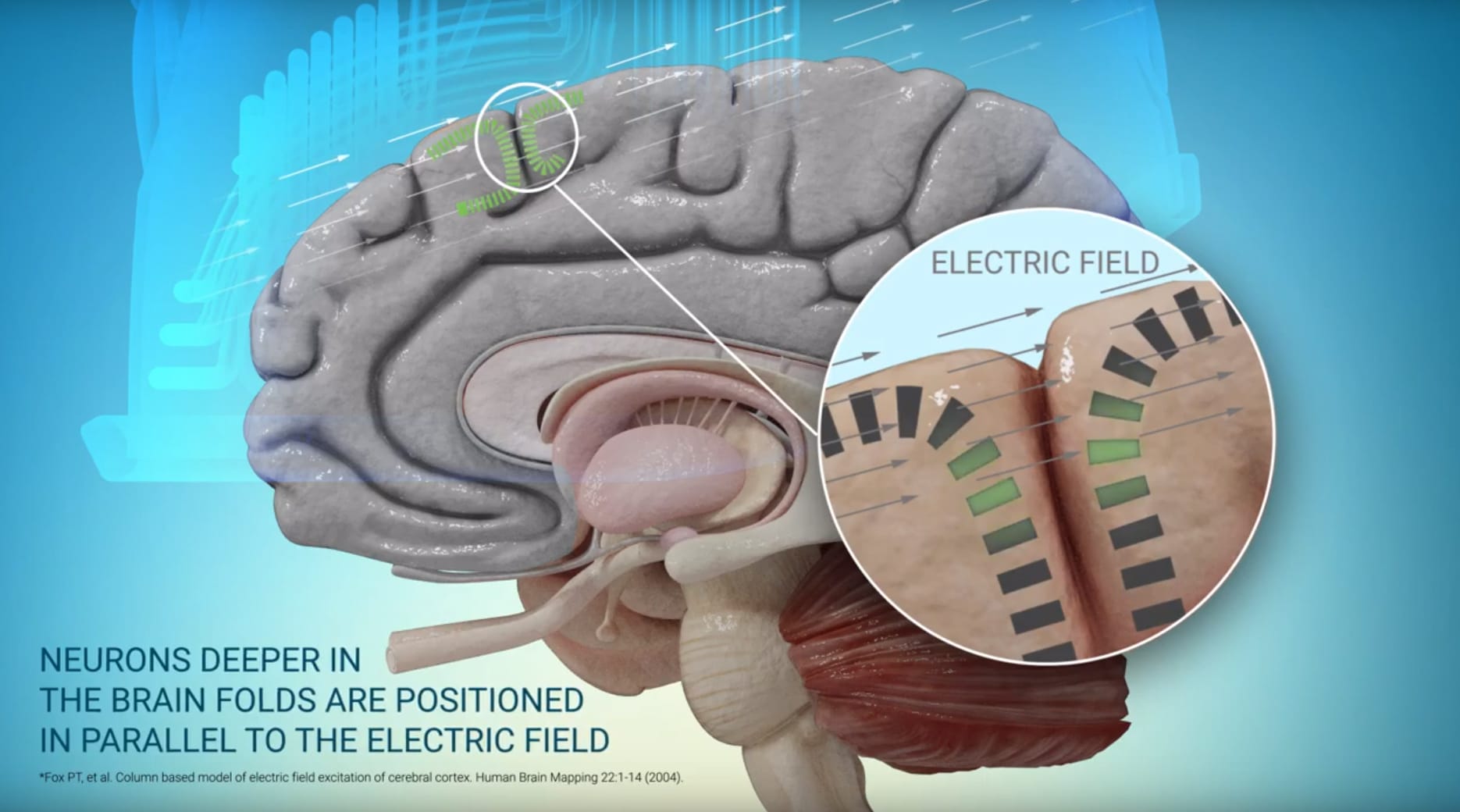 The stimulation of the targeted areas releases neurotransmitters and nerve growth factors and increases the density of the connections between the neurons called synapses. For example, in depression, the targeted area of the brain which has been shown to be underactive is called the dorsolateral prefrontal cortex. The stimulation of the axons of the neurons (nerve cells) of this area triggers what is called an action potential which is similar to an electrical pulse travelling down a wire. At the end of the axons, the neurons connect to other neurons via neurotransmitters such as serotonin and norepinephrine. This causes the other neurons to also trigger. Over time, the targeted area slowly becomes more and more active. Another way to look at it is that the area in question is isolated from its surroundings and not working in keeping a normal mood. When stimulated by the pulsed electromagnetic fields, targeted areas can have their activity increased or decreased depending on if the pulses are applied at high frequency or at low frequency, respectively. Other areas of the brain are also targeted to treat a variety of neurocognitive and psychological conditions such as anxiety, Obsessive-Compulsive Disorder, Post-Traumatic Stress Disorder and Traumatic Brain Injury.

What are the benefits of TMS therapy?

Every patient’s body chemistry is different and as such, results will differ from person to person. TMS therapy may be able to alleviate your symptoms of depression or help them disappear entirely. Typically, relieving depressive disorder symptoms may take several weeks of treatment. It is a safe and well-tolerated treatment.

What are the side-effects of TMS therapy?

The treatment is without the side-effects typically experienced with anti-depressants. Some patients report fatigue in the hours after a treatment. There can also be headaches and scalp discomfort during TMS therapy treatment. Although all medical treatments can carry risks, the risks of TMS therapy is considered to be very minimal, and it is generally very well tolerated.

Is TMS therapy for you?

TMS therapy is Health Canada approved for patients with treatment resistant depression. If you have already tried anti-depressants to manage your depression but are still not satisfied, TMS Therapy may be the treatment option for you. TMS Therapy doesn’t use a drug, so there are no foreign compounds introduced to the body, and it does not have the side effects typically associated with drug therapy.

You may not be eligible for TMS therapy if you have:

Can other health conditions be treated with TMS therapy?

While TMS is currently Health Canada approved for depression, there is ongoing research into the treatment of other medical conditions, including post-traumatic stress disorder, bipolar disorder, auditory hallucinations, obsessive-compulsive disorder,  anxiety, chronic pain, substance use disorders and migraine headaches. We have treated a variety of off-label conditions with TMS therapy.  Contact us if you would like further information about TMS therapy treatment for these conditions.

Should I have any testing done prior to the assessment?

No. We will take a full history during the assessment or at the intake appointment.

Should I start or continue psychotherapy while receiving TMS therapy?

We strongly recommend combining psychotherapy with TMS treatments.  Studies show that the transcranial magnetic stimulation of the prefrontal cortex can reinforce gains made in psychotherapy.

We recommend that our patients continue ongoing psychotherapy with their current therapist. If you don’t have a therapist, we do offer counselling services by Registered Social Workers and Registered Psychotherapists, if you wish to start therapy while receiving TMS treatments.

If you or your healthcare provider has determined that TMS therapy may be right for you, you will proceed with an assessment with our Consultant Psychiatrist and Registered Nurse. During this assessment, we will screen for contraindications to TMS therapy, as well as discuss your medical and psychiatric history and medications. The initial assessment acts to ensure that you are a suitable candidate for TMS therapy. Any of your remaining questions or concerns can be raised at this time. Intake forms and a new patient informational packet will be provided. 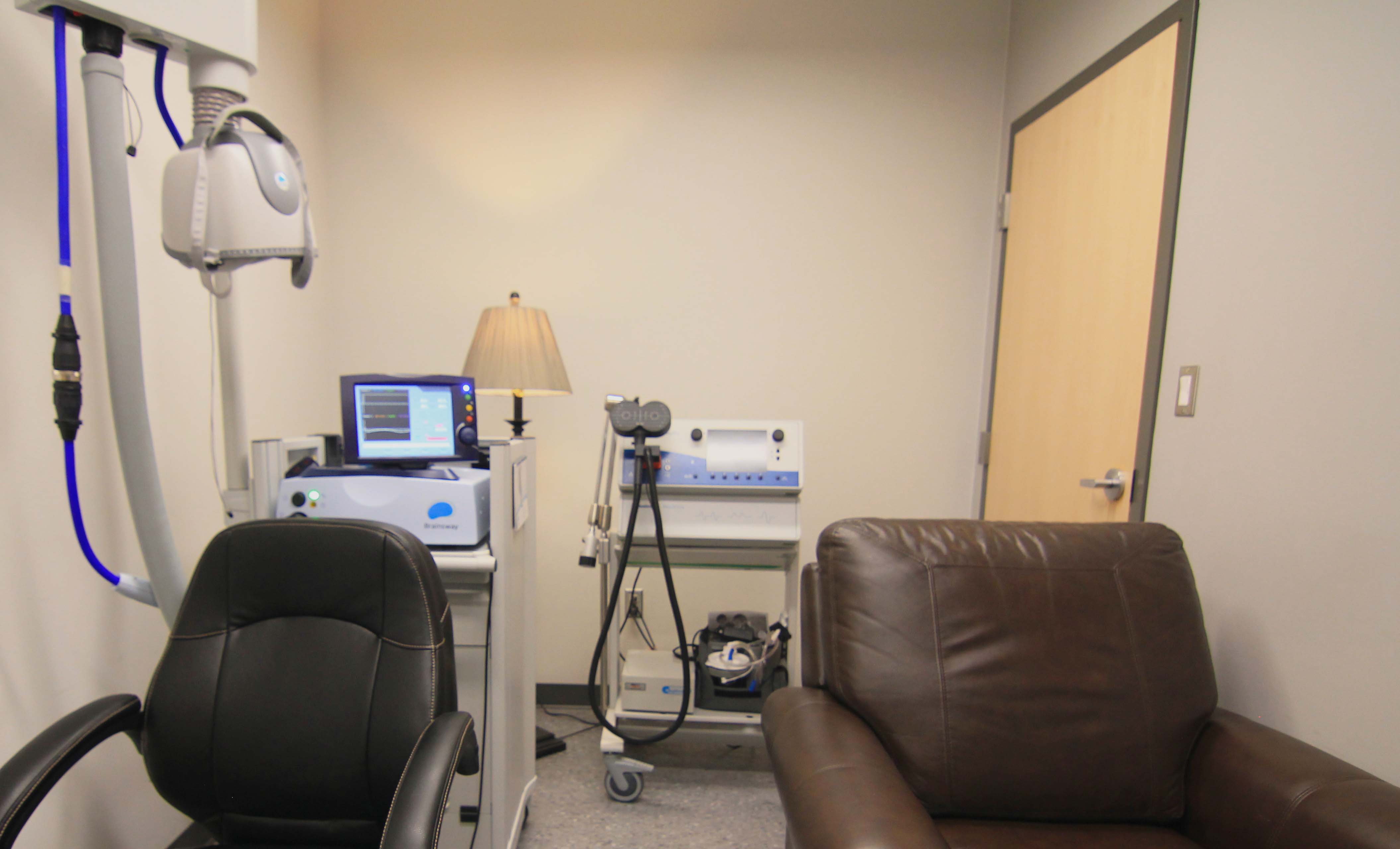 Treatment is administered by a trained technician and overseen by a medical doctor. You will get a chance to familiarize yourself with the equipment and treatment procedure prior to starting the first session.

The intensity of the stimulus that will be delivered is determined by inducing a motor-evoked potential (i.e. causing movement or a twitch to occur) in the thumb muscle. You may feel a tingling or tapping sensation on the head. Scalp muscles may feel a little tense, during and a bit after the procedure. This is normal and may result in a minor headache.

The TMS therapy treatment protocol consists of 30 to 50 sessions. Sessions are usually Monday through Friday over 6 to 8 weeks, excluding weekends and holidays.

Each treatment session is approximately 20-30 minutes.
In some cases, 5-10 extra sessions are recommended for late responders. This need will be assessed with you individually by our medical staff.

It is important that you feel comfortable at HeadWay Clinic. Please feel free to discuss any concerns and feelings that you are experiencing, and to ask questions as they may arise.

HeadWay Clinic staff members appreciate learning how we can help make your treatment experience as pleasant as possible. 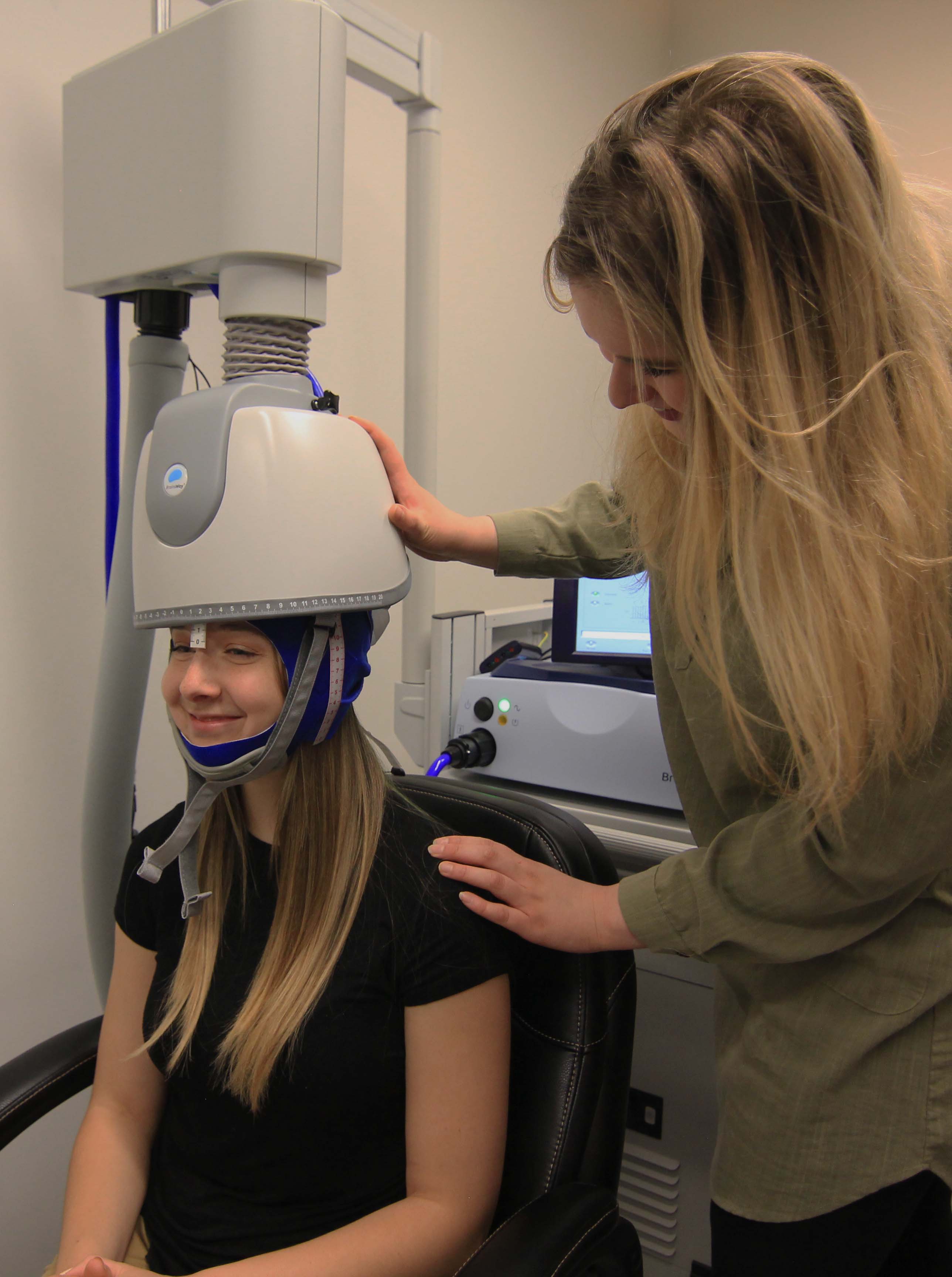 Treatment response is determined based on clinical assessment scales and verbal feedback from patients.

At the end of treatment our Consultant Psychiatrist will meet with you to review your treatment, discuss ongoing needs and answer any outstanding questions.

Our team cares about ongoing patient progress following treatment. It is our priority to keep in contact with patients and encourage them to do the same.

Following a successful TMS therapy treatment, Maintenance Treatment sessions may be required to avoid any relapse.

You will be encouraged to call HeadWay Clinic medical staff immediately if you sense depressive symptoms returning.

Is TMS therapy covered by insurance?

Please contact your benefit or insurance provider to see if you qualify for full or partial coverage of TMS therapy. If you were involved in a motor vehicle accident, your insurance will likely cover it if it is necessary and reasonable. Veterans Affairs (Blue Cross) and active Candian Forces personnel will usually cover it for PTSD and Depression.

If insurance coverage isn’t an option, HeadWay Clinic can provide a payment plan option to cover the cost of treatment.

Please Note: Electrotherapy devices for the treatment of a medical condition or severe mobility impairment can be claimed on your tax return. A medical prescription is required.

Will I still need antidepressants after TMS therapy?

How is the treatment different from ECT?

In reality, TMS therapy is not at all like Electro Convulsive Therapy (ECT). ECT is a treatment based on using electricity to induce seizures. On the other hand, Transcranial Magnetic Stimulation uses magnetic pulses to non-invasively stimulate specific brain regions associated with major depressive disorder.

No seizures are required for the treatment to be effective, nor are they desired!

ECT requires anaesthesia and can have serious side-effects, including memory loss. TMS therapy is performed in our office, requires no anesthesia, and has no systemic side effects.

What are the CANMAT guidelines?

The Canadian Network for Mood and Anxiety Treatments (CANMAT) is an organization that establishes guidelines for the management of Major Depressive Disorder (MDD) in adults, with a target audience of psychiatrists and other mental health professionals.

To learn more about CANMAT guideline, please visit The Canadian Journal of Psychiatry. The link can be found in the Resource section below.

Where can I find more information about mental illness?

The following links can help with any questions you may have about mental illness. If you believe you suffering from depression and need immediate help, please speak with someone or contact the Crisis Text Line.

Where can I find more information about TMS therapy?

You can join us for one of our FREE workshops presented by our medical staff. Click here for more information on upcoming events.

You can contact us directly and speak with one of our TMS therapy specialists.

Book your Free Consultation with our nurse today.

In psychiatry, it has shown potential with anxiety disorders, including panic disorder and obsessive-compulsive disorder (OCD). The most promising areas to target for OCD appear to be the orbitofrontal cortex and the supplementary motor area. Older protocols that targeted the prefrontal dorsal cortex were less successful.  It has also been studied with autism, substance abuse, addiction, and posttraumatic stress disorder (PTSD). For treatment-resistant major depressive disorder, HF-rTMS of the left dorsolateral prefrontal cortex (DLPFC) appears effective and low-frequency (LF) rTMS of the right DLPFC has probable efficacy.

TMS can also be used to map functional connectivity between the cerebellum and other areas of the brain.

TMS therapy around the world

Transcranial magnetic stimulation (TMS) has been recommended by the American Psychiatric Association since 2010 for treatment of major depressive disorder and approved by the UK National Institute of Health and Care Excellence (NICE) in 2015.  TMS therapy is also FDA and Health Canada approved.

A brief history of TMS therapy at HeadWay Clinic

Headway Clinic has been offering Transcranial Magnetic Stimulation in Sudbury since 2007, and has treated dozens of patients successfully.

Our Consultant Psychiatrist, Dr. Gagnon is proud to announce the arrival of Deep TMS; a new state-of-the-art technology proven effective in treating individuals suffering from psychological, and neurocognitive symptoms.

See the videos in our testimonial section below for more information about the benefits of Deep TMS. 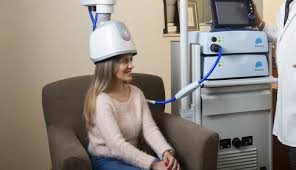 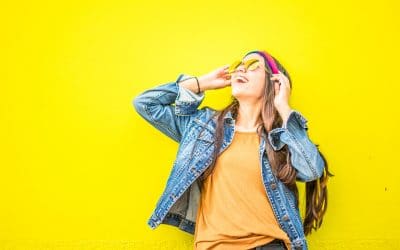 Repetitive Transcranial Magnetic Stimulation (rTMS) is a non-invasive treatment that stimulates the brain. rTMS is used for multiple reasons, including treating tinnitus, depression, anxiety, and other psychiatric disorders. Even though rTMS is used to treat so many...